The American Cancer Society has designated November as Lung Cancer Awareness Month. According to the American Lung Association, lung cancer is the second most common form of cancer in the U.S.

Each year, lung cancer accounts for roughly one in four cancer deaths. In fact, more people die due to lung cancer related causes than prostrate, colon, and breast cancers combined. An estimated 234,000 of new cases of lung cancer are expected to be diagnosed this year alone.

Most Lung Cancers are Smoking Related
Cigarette smoke contains over 4,000 different chemicals, many of which are known carcinogens (cancer causing substances). The majority of lung cancers are preventable, in that they are related to smoking (or exposure to secondhand smoke) at work or home. The only truly safe cigarette is one that is never smoked.

The second leading cause of lung cancer in non-smokers is radon, a tasteless, odorless, and invisible, radioactive gas. A natural phenomenon, radon is caused by the breakdown of uranium in rocks and soil. If you are concerned about radon in or near your home, the federal government has listed radon testing and information here.

Exposure asbestos (federal regulations now limit how asbestos is used in commercial and industrial products), arsenic (which can occur in contaminated drinking water), pesticides, inhaled chemicals and or minerals, diesel exhaust, radiation therapy to the chest, air pollution, and or a family history of lung cancer, have all been linked to the development of lung cancer. Some people who get lung cancer do not have any known risk factors.

There Are Three Main Types of Lung Cancer

A type of neuroendocrine tumor, small cell lung cancers (also called oat center cancers because of their appearance in pathology samples), usually arise within the bronchi (the main air passages that branch off the windpipe).

Lung Cancer May Not Create Symptoms at First

Lung Cancer Screening
Lung cancer screenings can help detect lung cancer in people who have not yet developed symptoms. According to the American Cancer Society, x-rays, which have long been used to detect lung cancer, may not be that effective in helping people live longer.

X-Rays and CT Scans
Other tests, such as a low-dose CT (computerized tomography) or LDCT scans can detect suspicious areas of the lung that may be lung cancer. When compared with x-rays, LDCT scans are a more effective screening tool for those with a higher risk of developing lung cancer, even when they have not displayed any symptoms. 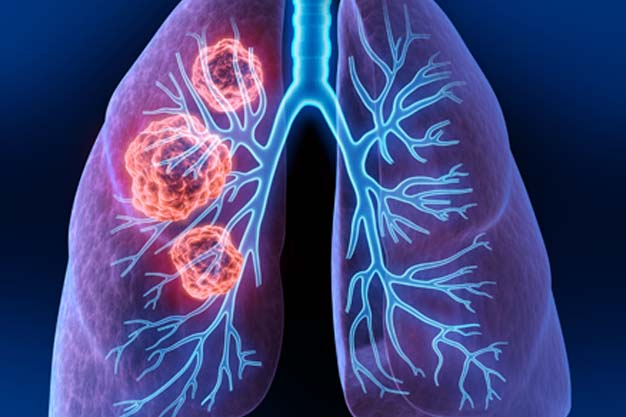 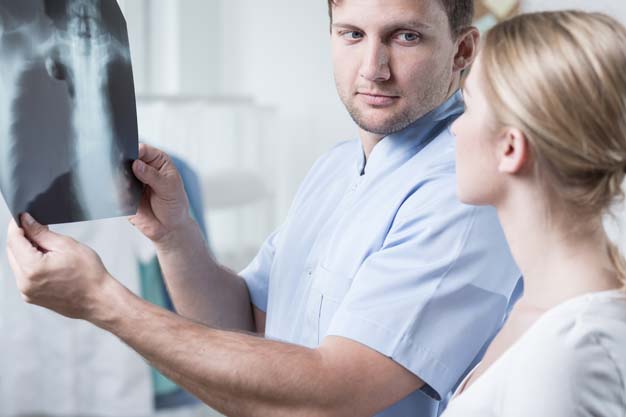 The average time between the onset of symptoms and a lung cancer diagnosis is over a year. Symptoms can be vague. They can also be misdiagnosed as they may present in ways that appear to be unrelated to lung cancer.

Symptoms may also present differently in males than females. When symptoms of lung cancer do occur, they can include:
• A persistent cough that may become worse
• Chest pain that becomes worse with deep breaths, laughing or coughing
• Hoarseness
• Loss of appetite
• Back pain (the pain may worsen when you take a deep breath or at night, and may be present even when you are at rest)
• Unintended weight loss
• Shortness of breath
• Fatigue and weakness
• Recurring lung infections such as bronchitis or pneumonia
• Wheezing

Additional symptoms such as bone pain, jaundice (yellowing of the skin or eyes due to the buildup of bile salts), swollen lymph glands, and others can be caused if the cancer begins to spread to other areas of the body. These symptoms however, can also be caused by other conditions and disorders. Click here.

Prevention
When it comes to lung cancer, the single best preventative measure is to avoid smoking and or exposure to secondhand smoke. If you do smoke, quitting can go a long way towards reducing your risk for developing lung cancer.

Lung Cancer Treatment
Because different types of lung cancer respond differently to treatment, the precise form of treatment will depend on the stage and kind of lung cancer in question. Lung cancer treatment may include:
• Targeted medications
• Radiation and/or chemotherapy
• Immunotherapy
• Surgery
• Supportive care

Be sure to talk to your healthcare provider about appropriate screenings if you have a family history of lung cancer, were or are a smoker, or have other risk factors.

ASP Cares is dedicated to helping patients with cancer, and other rare conditions and disorders. We proudly offer patient-centered, exceptional care for all of our valued patients. To learn more about how we help patients maximize their current healthcare benefits, locate alternative funding to pay for treatments when possible.